An Afternoon in the Park with authors
Sylvia Olsen and Ian Haysom
Friday, July 16th at 3pm

Admission is by donation at the event. The suggested donation is $10. Please go to sidneyliteraryfestival.ca for more information.

SYLVIA OLSEN is an adult educator and facilitator specializing in First Nations housing. She married into the Tsartlip First Nation near Victoria, BC, and developed relationships with Coast Salish knitters through her family’s sweater shop. Olsen was inspired to explore the juncture of her English/Scottish/European heritage and Coast Salish life experiences, bringing to light deeply personal questions about Canadian knitting traditions. She is the author of over twenty books for adults and children, including Working with Wool: A Coast Salish Legacy and the Cowichan Sweater, which was awarded the Lieutenant Governor’s Medal for Historical Writing. Unravelling Canada: A Knitting Odyssey is her cross-Canada cultural road trip.

IAN HAYSOM  Father of four, grandfather of four, and lifelong journalist IAN HAYSOM was born and raised in England and worked as a reporter for The Evening Standard before immigrating to Canada in the 1970s. He worked at several major Ontario dailies and eventually relocated to BC, where he rose to editor-in-chief at both the Vancouver Sun and Province. Moving to television in the 1990s, he became news director at CHEK-TV and later Global News. Now happily semi-retired, he continues to work as a news consultant.

Grandfathered – Dispatches from the Trenches of Modern Grandparenthood is a sharp, funny, heartfelt memoir by a career-driven baby boomer who enters semi-retirement and explores the joys, challenges, and never-ending surprises of being a “young” granddad. 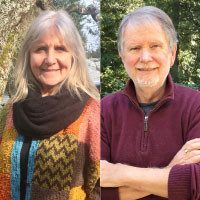