The Deb Rhymer Band features Canadian veterans Kelly Fawcett, Andy Graffiti, and Clayton O’Howe. Deb and her band are mainstays at clubs and festivals and are the hosts of one of the most popular and longest-running blues jams in the Pacific Northwest – Sunday Blues Services. Drawing from the classics to the strong songwriting women of today’s Northwest music scene, Deb and her band deliver a sophisticated blues brew.

The band’s latest CD “Don’t Wait Up” is receiving airplay all over the world and has reached the Top 10 Contemporary Blues Albums in Canada. Four songs have also reached the top 5 songs in British Columbia. Deb was nominated for Best New Artist for the 2019 Maple Blues Awards and the CD was a semi-finalist in the 2019 International Blues Challenge. 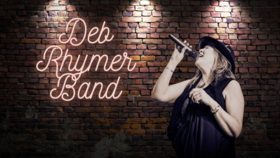