Collaborating for Conservation – final week in the RBCM Pocket Gallery

The Pocket Gallery is a small display space in Clifford Carl Hall, on the main floor of the Royal BC Museum.

The gallery showcases the little-seen behind-the-scenes work of the Royal BC Museum.

Pocket Gallery displays change regularly, as Royal BC Museum professionals continually pitch fresh ideas and focus on new projects.  Access to the Pocket Gallery is free to all visitors.

This display highlights the Royal BC Museum’s role in documenting BC’s natural heritage through the collection of biological specimens in BC Parks.  It also highlights the roles played by our university colleagues collecting digital observations and park visitors contributing submissions to the iNaturalist app.

Coordinated by Claudia Copley, Royal BC Museum entomology collections manager, Collaborating for Conservation celebrates how the museum, universities and the public all help BC Parks document the diversity of species in parks.

The result of all this documentation has been a massive overall increase in knowledge about biodiversity in BC’s provincial parks—the third-largest parks system in North America.

Visit the display to learn more about the major role citizen scientists play in developing awareness and knowledge of the natural world. Everyone can contribute! 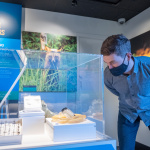